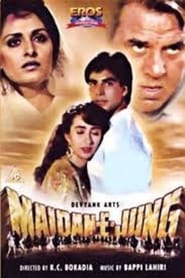 Overview： Daata Guru (Amrish Puri) is a wealthy, powerful, and influential head of a village. He owns and controls all the villagers and their properties. Anyone who dares to raise their voice against him is crushed by his employee, Shankar (Dharmendra), and his sons, Guman (Gulshan Grover) and Karan (Akshay Kumar). When Daata Guru learns that Shankar has abducted his widowed daughter-in-law, Lakhsmi (Jaya Pradha), and has married her, he is enraged and wants Shankar dead. Daata Guru also instigates Karan against Shankar, and threatens the villagers to cut off their water supply if they do not turn in Shankar to him. What will Shankar do to protect his new wife and himself from the wrath of Daata Guru and his men? Enjoy unlimited entertainment with the whole family at no charge, here at DivxFree divxfree.com...