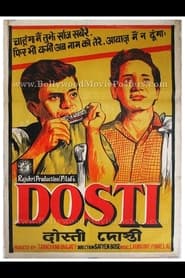 Overview： Mr. Gupta passes away after an accident while on duty, leaving behind his ailing wife and school-going son, Ramnath. Both await for some compensation, and when they are informed that the company does not accept liability for Gupta’s death, his wife falls down the stairs. and passes out. When Ramnath goes to fetch a doctor, he is knocked down and run over by a speeding car, losing the use of his left leg. When he returns from hospital, he finds that his mom has passed away, and his landlord has evicted him. Penniless and hungry, he roams the streets of Bombay and befriends a blind young man, Mohan, and both use their talents – playing and harmonica and singing respectively to earn some money. Mohan is on the look-out for his sister, Meena, who works as a Nurse in one of the hospitals and hopes to be reunited with her. Both friends befriend a ailing young girl, Manjula, and hope to get some money from her so that Ramnath can attend school. Enjoy unlimited entertainment with the whole family at no charge, here at DivxFree divxfree.com...